Despite the nearly popular approval that he has obtained so far, the monumental artistic figure of Clint Eastwood has been shaped by many harsh criticism, questioned about his morality and got radical reviews about the ideologic system of a lot of his works. Indeed, since the beginning, Eastwood carrier couldn’t go with the flow, compared to the liberal times that were running between the 60’s and the 70’s in the United States , and that’s why it was immediately obstructed, rejected and misunderstood. Many critics didn’t hesitate to give superficial opinions and childish tags to the actor, creating a public image that soon will be seen as hateful and oppressive to his eyes. Right from the never ending struggle against the masks that they put on him from time to time, the artistic path of Clint Eastwood begins: every threat about the main characters becoming stiff, stimulates him to destroy each one of them, blowing ‘em up, and moving forward with a swinging motion to the construction and deconstruction of the roles that he plays.

The first important role is the cowboy Rowdy Yates in the CBS tv series Rawhide, in which the young Eastwood, playing the nice country boy, seduces the female audience, connecting his face to the friendly and honest nature of the character. Soon, however, Rowdy’s dandy figure makes the actor intolerant, in the need of taking that character away from him as soon as possible. Therefore, it’s not that surprising the way he accepts with enthusiasm a role of a grouchy cowboy, offered by a little Italian director in the USA. Eastwood throws away his mask of the good farm boy and put on new shoes: icy eyes, wide-brimmed hat right on his forehead, rude manners, a cigar and a mexican poncho. The so-called Dollars Trilogy by Sergio Leone (A Fistful of Dollars, 1964; For a Few Dollars More, 1965; The Good, the Bad and the Ugly, 1966) becomes an international success, but what the protagonist interpretation got was just a lukewarm critique, that does not buy his tense expression and the firmness of his features. In addiction, there are a lot of critics that blame the character individualism, cynicism and the brutality of his behaviour, spreading some first clues of what will soon be an extended misunderstanding of Eastwood’ style.

After the leading roles in some western movies like Hang ‘Em High (1968) by Ted Post, Where Eagles Dare by Brian G. Hutton (1968), Paint Your Wagon by Joshua Logan (1969), Two Mules for Sister Sara by Don Siegel (1970) and an offer to take part in Once Upon a Time in the West (Sergio Leone, Italy/USA 1968), the risk to remain stuck into the same roles urgently returns. The poncho and the cowboy hat are replaced right away with a 44 Magnum: the meeting with Don Siegel can be seen as an extraordinary opportunity of a metamorphosis. The collaboration between the two of them delivers major hits (from Coogan’s Bluff in the 1968 to Escape From Alcatraz in the 1979), but even in this case, the conventional critics are unable to understand the role of Eastwood and, headed by the sharp pen of Pauline Kael, shall develop a misleading interpretation not only about Eastwood characters, but also about the artist himself, so-called spokesman of a fascist and rigid ideology.

Pauline Kael, the bitter film critic of “The New Yorker”, in 1972 defines Dirty Harry (1971) a “deeply immoral” movie with a “fascist potential”, violently influencing the audience and forcing the critique into the direction of a fierce and undeserved performance of the character played by Clint Eastwood. The charges of sexism, violent tendencies, arrogance and immorality that Kael points at “dirty” Harry Callahan, are similar to the ones of few years before, that were addressed to the “nameless stranger” in the movies of Leone; also, the actor aspect seems to be indissolubly linked to the grouchy nature of his characters. The boundary between fiction and reality falls so much short that the moral and conceptual ways of the individual pass into the hands of the performer, whom obvious radicalism is being charged as intransigent. In the course of a historical time as the 70’s in the United States, everything that isn’t relevant to the liberal ideology of the counterculture, it’s an opposition of it, showing to be a simple addition to the Nixon radicalisms. The ideological interpretation of art wins over the negative one, and the carrier of Clint Eastwood is severely tested by such approach.

However, on a closer look, the role of Harry Callahan isn’t conservative at all and the movie is far from justifying the brutality and random penalties of the strong arm of the law – like the critics said multiple times –, but rather it aims at the exact opposite: undoing the image of the hero and change the fairy tale dynamics where the good man fights the bad one. Callahan doesn’t identify with the stereotype of the honest, dedicated and lawful policeman; he is a lonely man, deeply disappointed by the justice system and desperate to reach his goal. There is no difference of moral order between him and Scorpio, the killer he’s after: both are selfish and cynical, they take action over the law and don’t hesitate to use violence to smoke each other out. It is no coincidence that the promotional slogan created by Warner Bros to launch the movie was “Dirty Harry and the Homicidal Maniac: Harry’s the one with the badge”.

Disappointed by the never ending accusations against him, at the beginning of the 70’s Eastwood moves to the other side of the camera, starting his own director carrier and working hard to tear down every cliché which the press tried to put him in. As a director, the work he accomplish on the characters is extraordinary: he chooses dark and sorrowful personalities for the protagonists of his stories; he takes the glossy and comfortable mask out of the hero, rejecting every ethical form. Knocking out the physical and moral integrity of the roles that he performs – it is no coincidence that it’s always him to give voice to the protagonists, almost to respond to the actor/director intersection promoted by the critics –, he gives life to imperfect figures.

The structural incompleteness of the characters of Clint Eastwood is clear, in the first place, just looking at the love side: most of the time, there are always men left alone after a loss or a grief. Therefore, it’s about an emotional state, where the concern weight on, and the regret toward a once lived happiness but that is now lost forever. One example is the troubled Josey Wales, seeking revenge after the homicide of his wife (The Outlaw Josey Wales, 1976), or “Dirty Harry” Callahan, made more tough and cynical with the death of his wife, or the widower William Munny, who recalls a lot his other half and the healthy influence that she had on his lifestyle (Unforgiven, 1992). Still, after several years, you can remember the alcoholic Steve Everett, abandoned by his wife in True Crime (1999), the lack of relationship between the trainer, ex-boxer, Frankie Dunn with his daughter (Million Dollar Baby, 2004), or the veteran Walt Kowalski, who buries his wife at the opening scene in Gran Torino (2007).

The deconstruction of the character and the clarification of the traditional role of the hero move forward, and show to be more interesting, right where he operates on the body area. Nobody like Eastwood has raged against his own characters in terms of punches, wounds and even mutilations. It’s shocking how many times the actor has to cope with violence on the screen, and the list of abuses is extremely long. After the fights with western (A Fistful of Dollars, Unforgiven) and urban features (Dirty Harry, The Gauntlet), comes a  stabbed shoulder (Two Mules for Sister Sara) a second one dislocated (Thunderbolt and Lightfoot), a scar on his face (The Outlaw Josey Wales), a leg amputation (The Beguiled) and even, a heart transplant (Blood Work). It’s all about a strong masochism tendency that highlights the author will to strongly destroy his own image and to create darker, lonelier characters, collapsed under the weight of sins and vices (just look at the alcohol problem of the protagonists in Unforgiven, The Honky Tonk Man, True Crime), just to use violence on them, rub it in their bodies and defeat them once for all.

The achievement of something like this path of deconstruction can only be done by the character of Walt Kowalski — the last one, both directed and performed by Clint Eastwood —, even more cynical, turned nasty because of his own hatred and isolated from a world he despise. Probably it’s the gloomiest protagonist in his movies, yet capable of redeem himself through an extreme act of death, which in this case, is an act of redemptive violence, that kills but also frees and heals. Eastwood, along with the final defeat of his character, finally brings to an end the path began fifty years before with the nameless stranger and definitively solves the inner contradiction that for years ripped himself and his own characters apart. 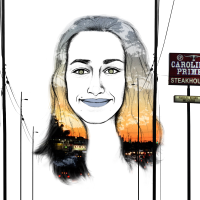 About the Author Giorgia Maestri